Coming Up for Air

I've had a busy month, but now I can finally breathe again.  On the furry feline front I've had to deal with Mimi's passing and Felix's diabetes. He is doing well, but he really hates to have his blood tested.  Hopefully we will soon work out the right amount of insulin to keep his diabetes under control.  I hate to see him unhappy. 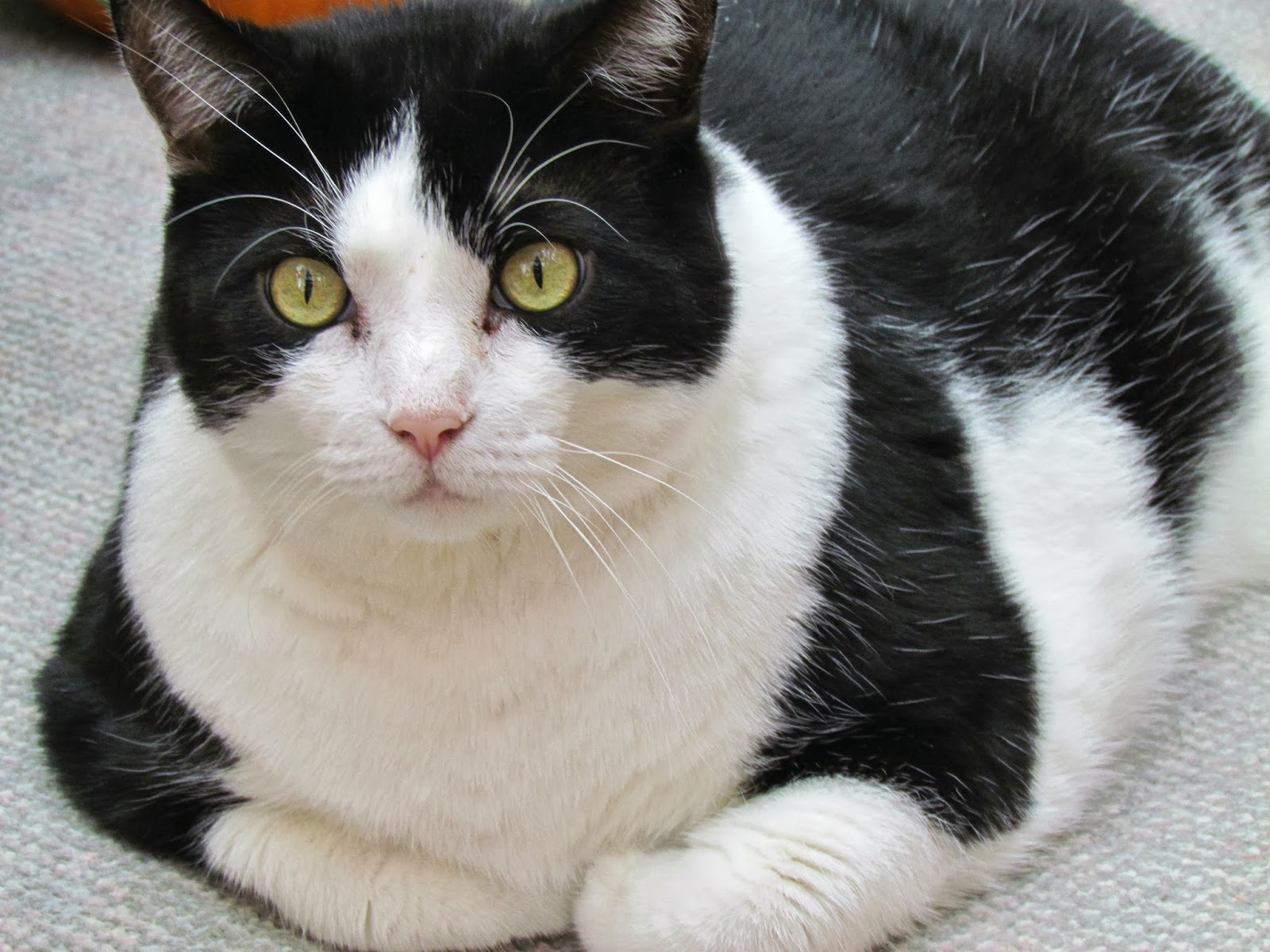 On the quilting front I finished my 'Garden of Hope' quilt and it is now at the LAQ.  It should be done by the third week of March.  That gives me time to bind it before our quilt show on the first weekend of April.  This quilt top almost didn't get finished.  I only had a couple of rows to still sew together.  Most of the blocks were done, so that was really no problem. I had to go out and buy some backing fabric because I didn't have enough.  That was no problem either.  I was even able to add a few fat quarters to my stash.  LOL

But pressing the finished top almost drove me to pull my hair out!  It was very wrinkled and because I made most of it while I was a patient at a rehab hospital some years ago, I did not have an iron to press each block as I finished it.  Many of the blocks needed some help from a spritz of water.  I guess I used too much water because some of the red fabrics bled into the lighter backgrounds.  I wanted to cry.  But then I decided all was not lost.  I took the damaged blocks out and remade them.  It took me a whole day to remake and sew them back into the quilt top.  I don't know why that happened because I always wash my fabrics with a colour catcher as soon as I get them home.  But maybe a lot of the fabrics in thisquilt were from before the time of colour catchers.  I plan to wash the blocks and see if I can restore them to their original beauty.  Then I will make them into blocks for a project (Soy Amado) that Little Island Quilting is doing for children in a home in Mexico City. I have several other orphan blocks that I can donate.

I was also asked to do a demonstration of English Paper Piecing at our Guild meeting on Monday evening. That meant finding finished quilts and partly finished quilts to help teach the technique.  It was a fantastic experience.  My fellow quilters were very interested and some of them went away with a pattern sheet to create their own hexies.  I took my camera so that I could take a photo, but I never got to use it.  There just wasn't enough time.  The demonstrations were done in a round robin fashion.  That only gave me about 12-15 minutes with each group.  I did see someone come over with a camera, so there probably will be a photo at some point.  I hope to be able to post it later. 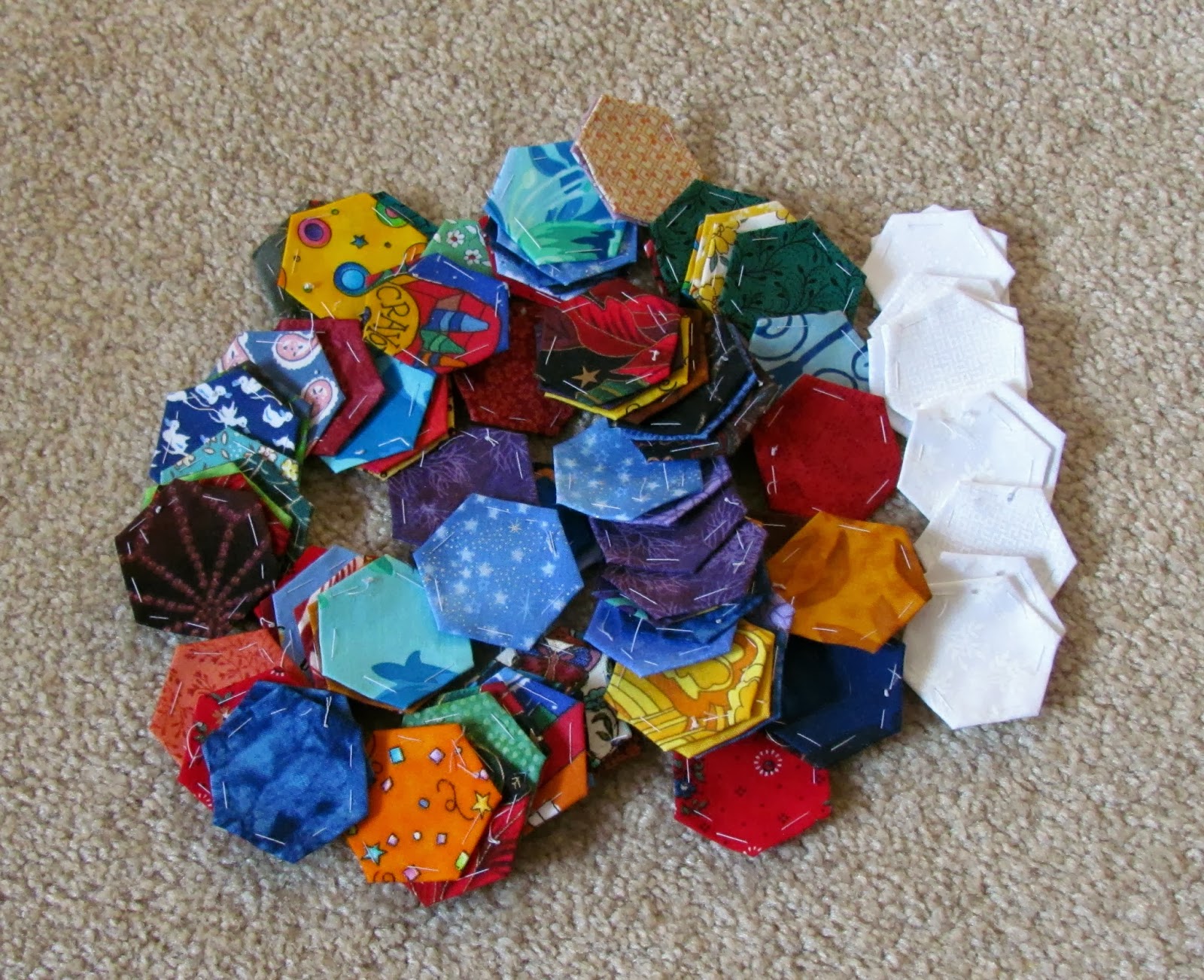 100 more hexies to sew together

The weather here is still cold and white.  We have had the most 'severe cold weather warnings' of any year since these records have been kept - about 28 days since the beginning of the year.  Today's high temp is -10C, (14F) but it will feel like -20C, (-4F).  The snow has not melted either and there are still huge piles of it at the sides of our driveway.  It rained a bit this past weekend, creating large puddles everywhere that froze into huge patches of ice.  Hospitals in our area are reporting an average of 4 slip and fall accidents per hour.  So I am staying indoors and waiting patiently impatiently for spring to arrive.

Now I am off to work on some of my current projects, mostly charity quilts.  It is a pleasure to have some time to work on those. I also went to the library and got some books to read.  Life is good.

OMG!  I didn't know I had such a hexagon problem!  I have been trying to locate all of my hexie projects in order to display them next Monday evening at our guild meeting.  That is when I will be demonstrating my hexies.  Since I will only have 10-12 minutes with each group, I thought I would find all of my hexie projects and use them as teaching tools.  Here are some of them... 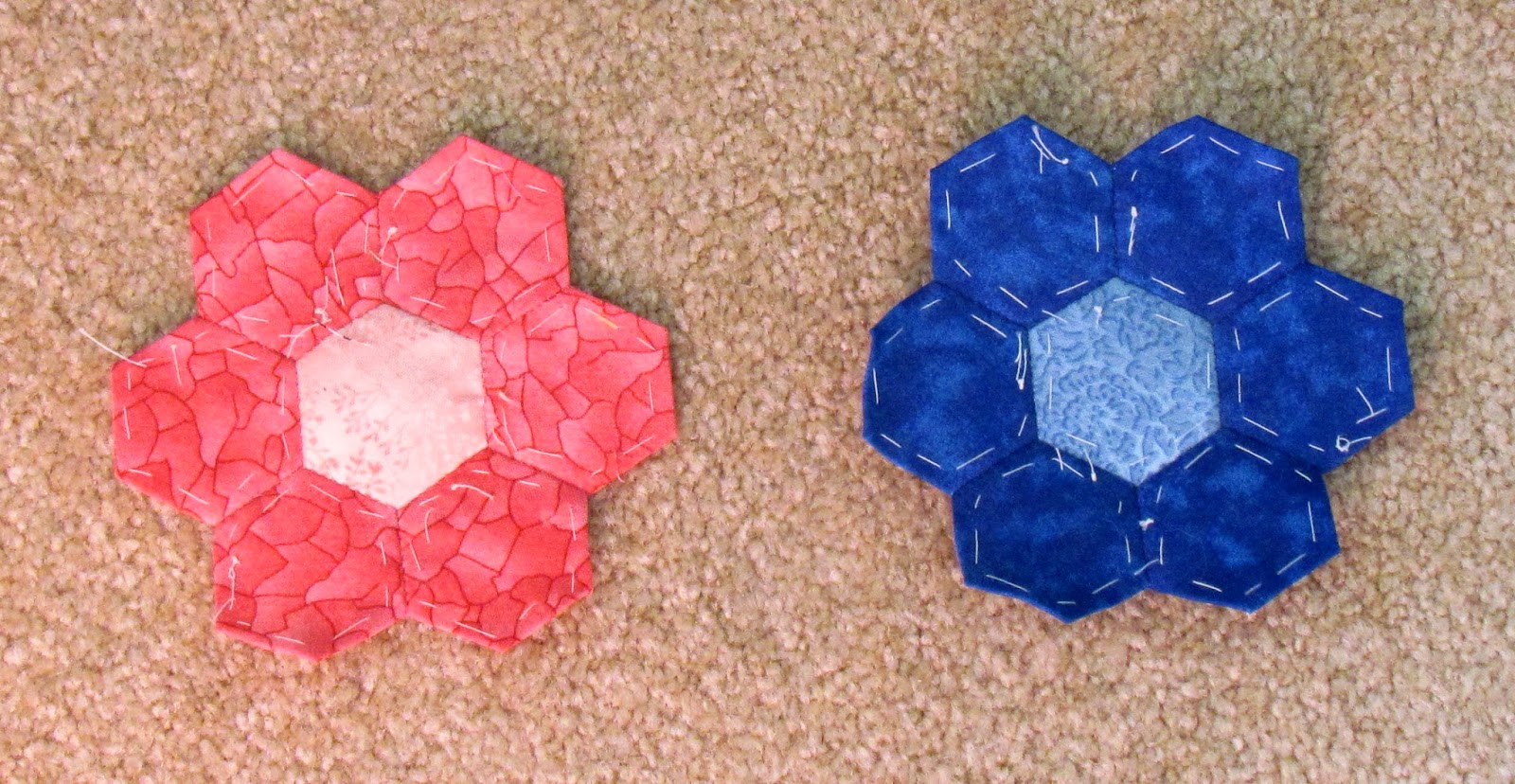 These are a couple of flowers that I plan to add to my basket quilt in order to make it larger.  You can see it here. 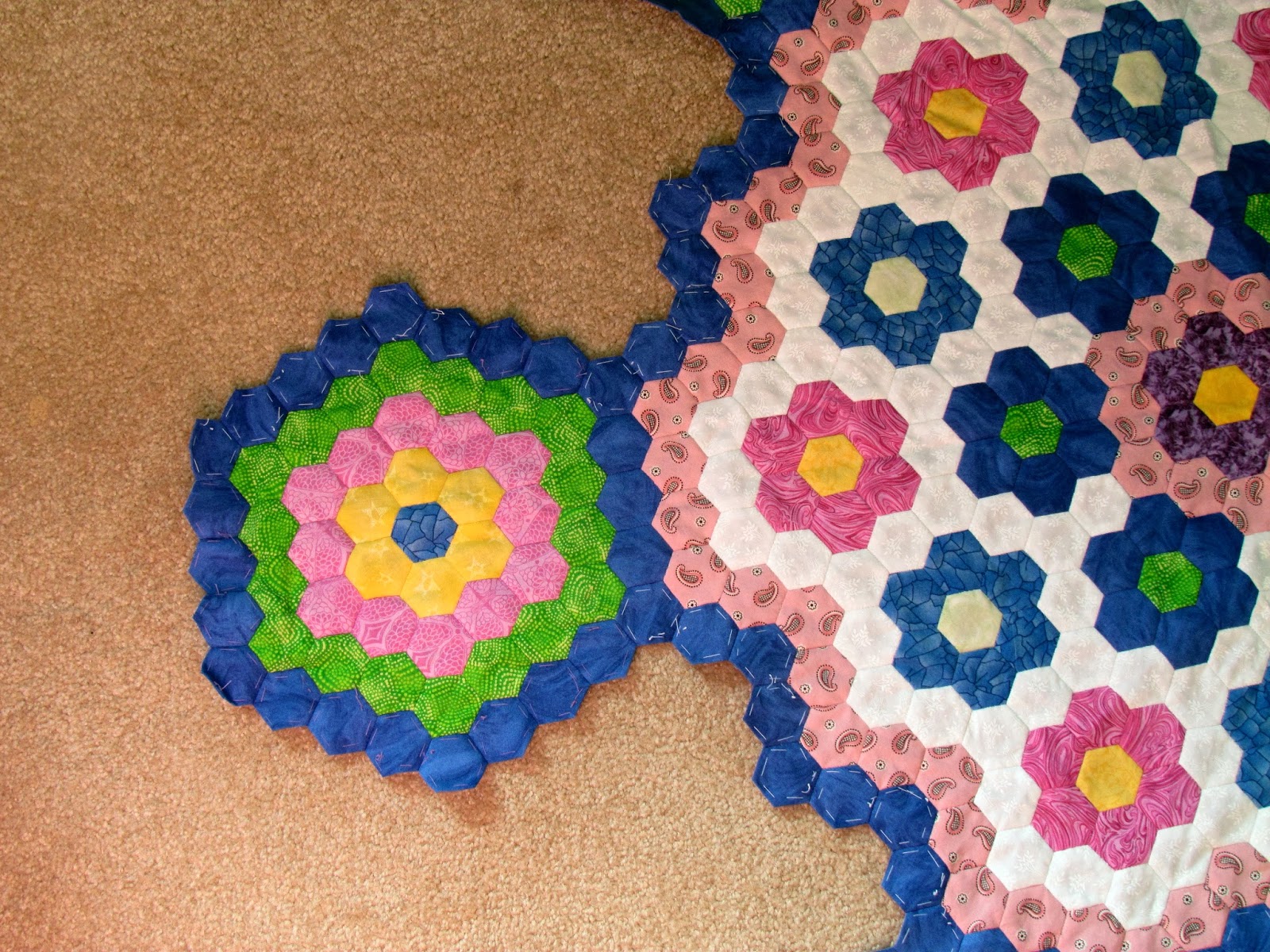 This is my La Passion.  I need to get back to this one soon. 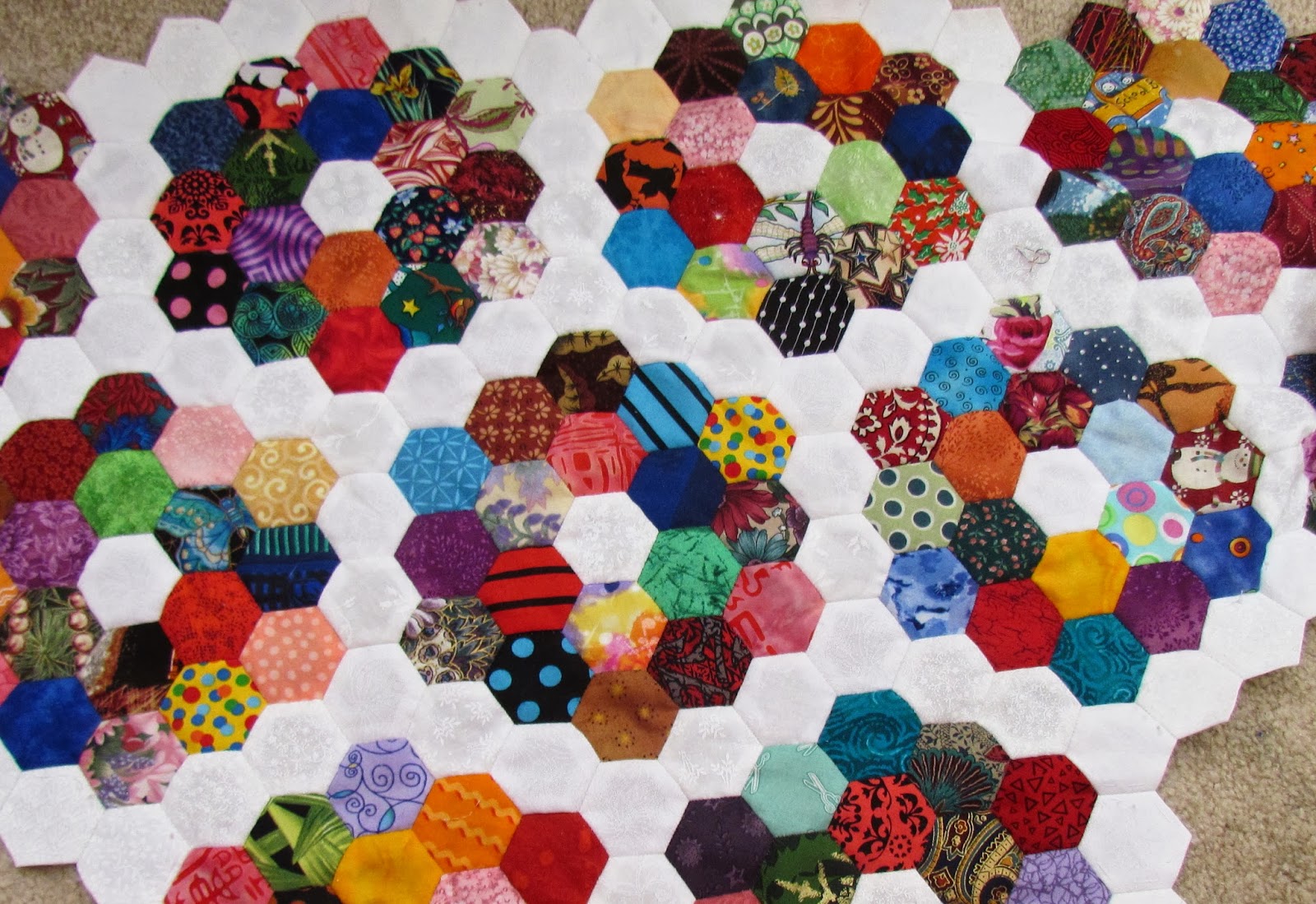 This is the one I am working on at the moment.  I will use these hexies to demonstrate the English Paper Piecing technique. 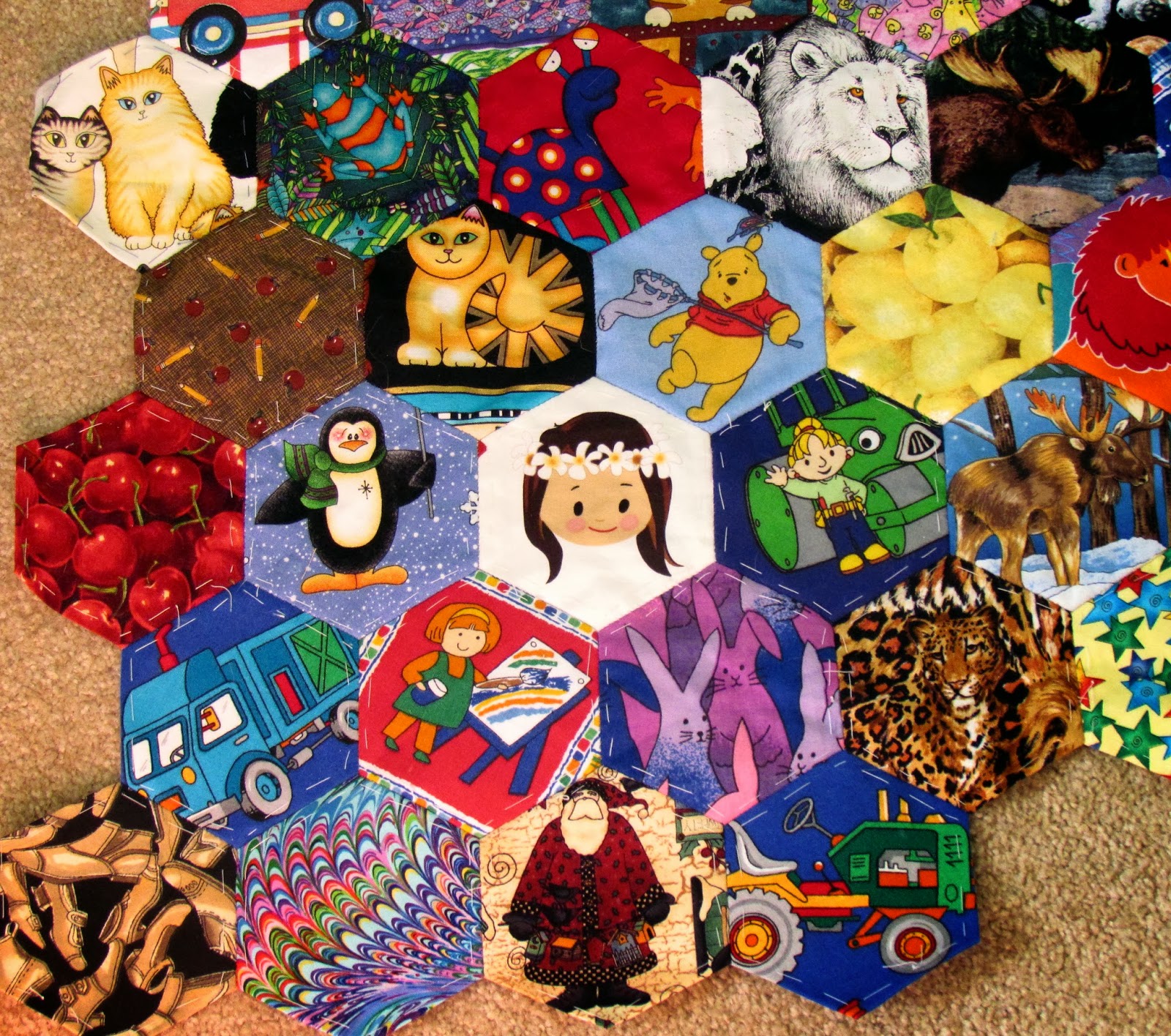 This is part of my "I Spy" quilt.  The hexies are much bigger than the ones I am used to. 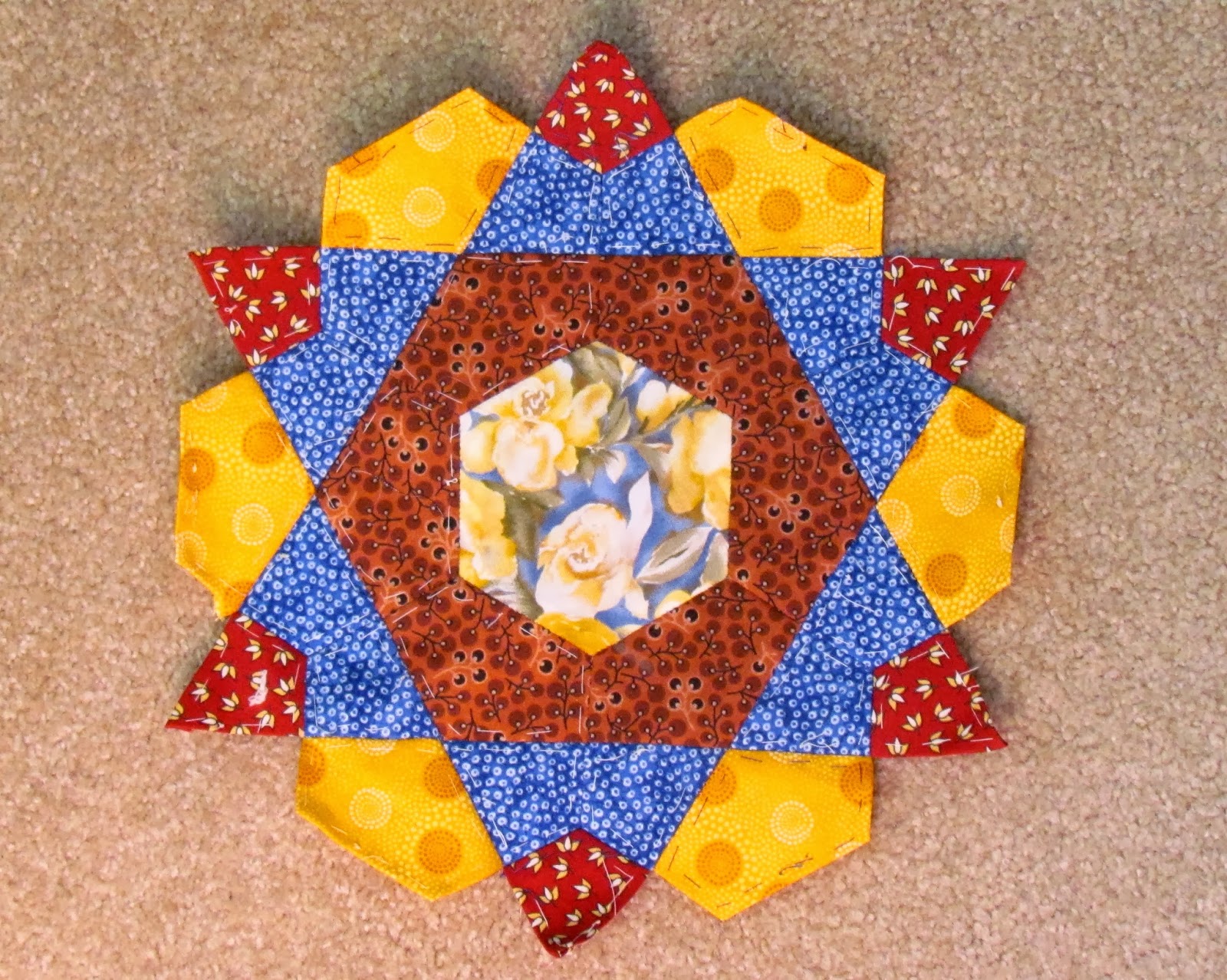 I love this one!  The pieces are all based on hexagons.  Still have to sew some more and then put them all together. 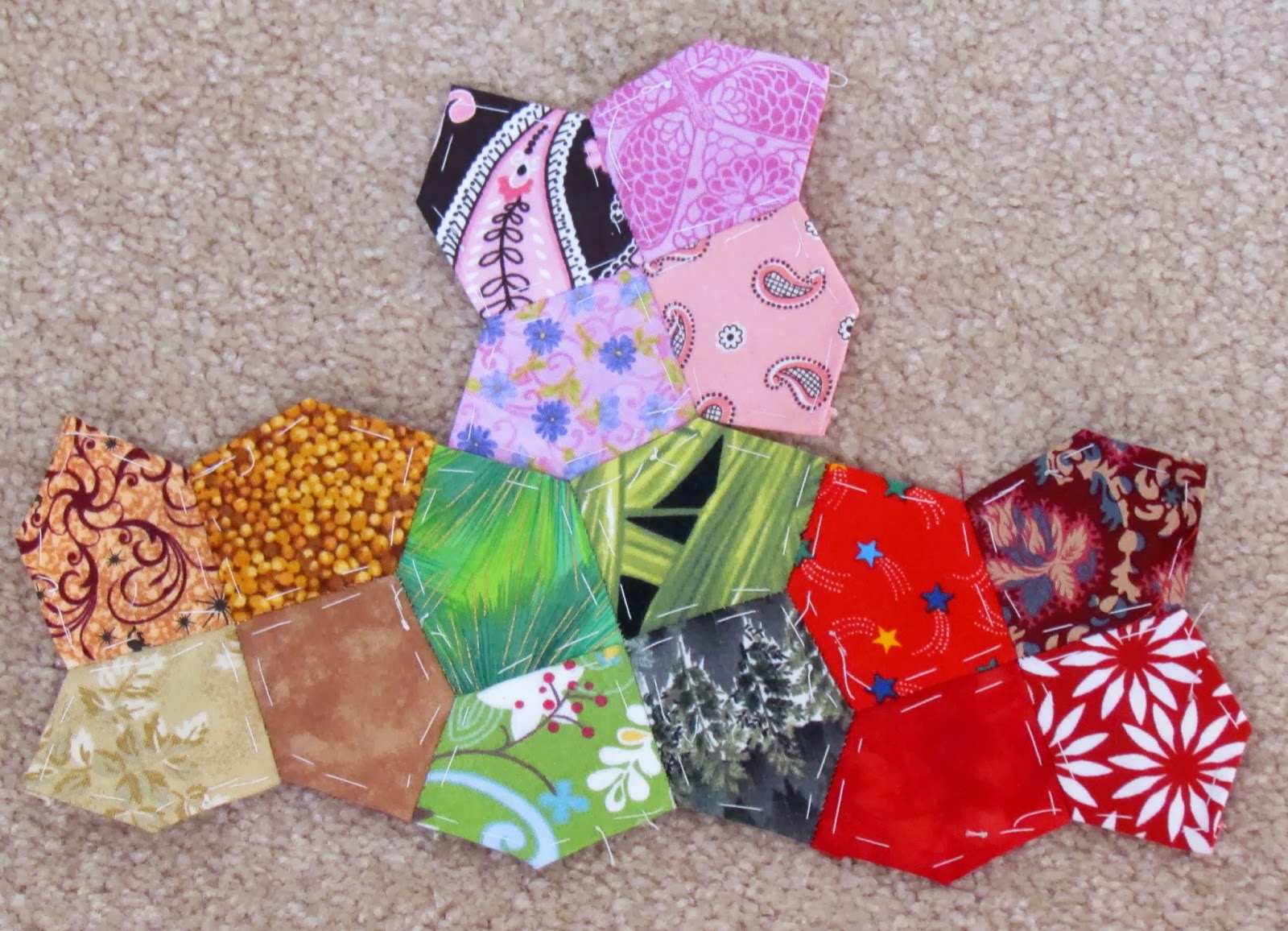 These are based on hexies too.  I have not committed myself to a whole quilt of these yet.  But maybe they will become a pillow.
Well, those are the hexies I have found so far.  There are more in my sewing room, but so far I can't remember where I put them.  Can you believe that?  I think I really do have a problem!
﻿
﻿
Posted by hetty at 10:26 AM 8 comments:

I had almost forgotten about my Goodnight Irene blocks for this month's quilt-along.  I had these blocks finished a couple of weeks ago, but when I went to iron them I noticed that I had sewn a few the wrong way, so I put it away and forgot about them.  But I will fix that soon.  I am so loving this pattern.  Lots of scraps are being used up, so that is a bonus.  And I am doing the squares as leaders and enders. 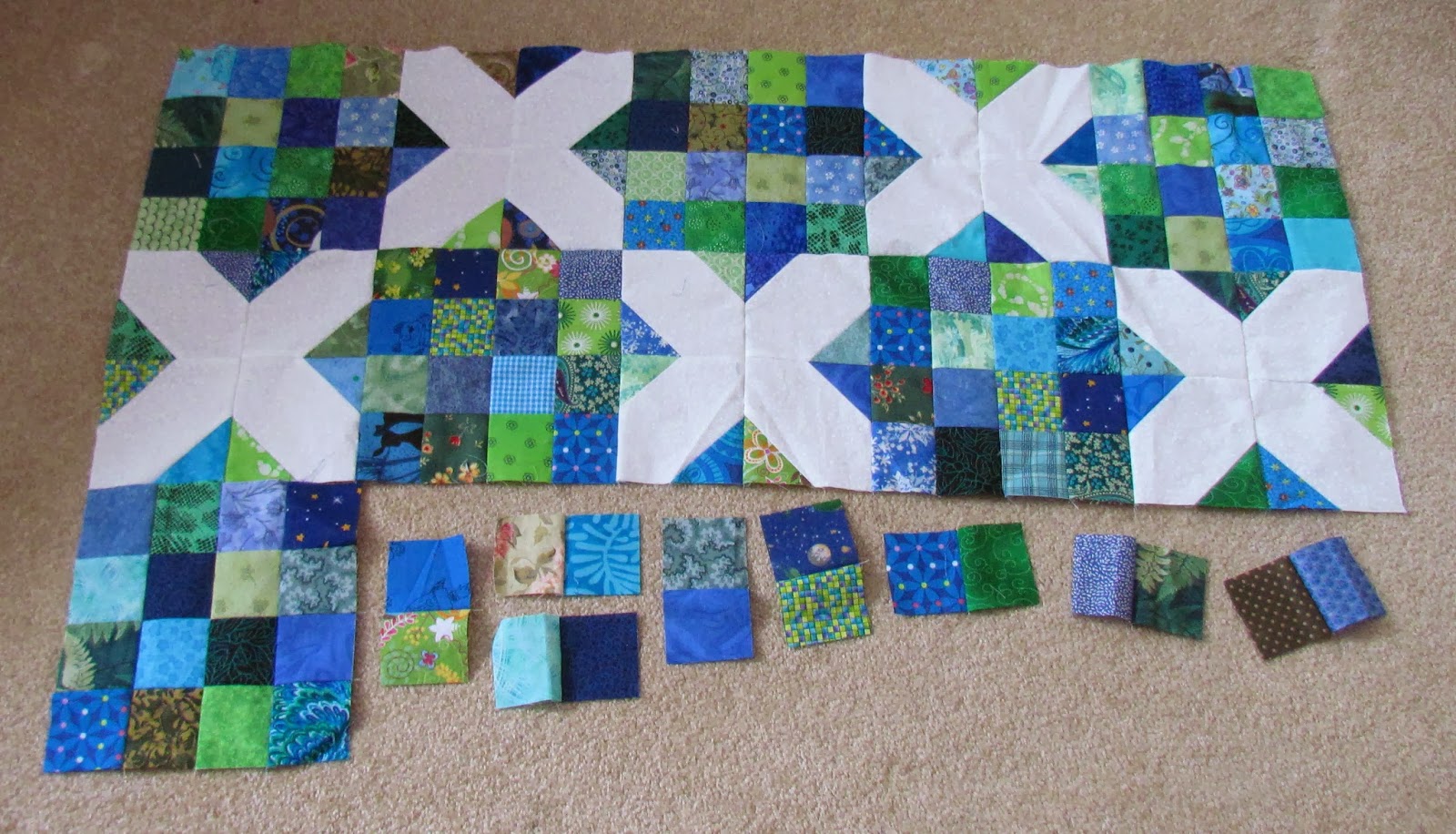 I am linking this to terrytreasures.blogspot.ca   You can find the link on her sidebar.
Posted by hetty at 9:48 AM 9 comments:

When Life Gives You Tribulations...

What do you do when the stresses of life are more than you can handle?  How do you deal with an illness that no one understands, but leaves you with the task of curing yourself.  How do you mourn a sweet kitty who was the love of your life?

About 5 years ago I was diagnosed with a rare auto-immune disorder.  I was treated with steroids and put into a rehab facility to learn to walk again.

It was summer time and I was stuck in a hospital.  I could not lift my legs off the bed.  I could not go up and down stairs.  I had trouble even walking using a walker.  I became very depressed.

Then one day the hospital allowed me to go to Walmart in my wheelchair.  They picked me and a few other patients up in a wheelchair bus.  I found a quilting magazine that gave me hope. I decided to make it as a sort of recovery quilt.  My room became a quilting studio.  I had boxes of scraps of fabric everywhere.  My bedside table became an ironing board.  Late at night would find me working on that quilt.  I was not able to finish it before I left the hospital.  But a couple of weeks ago I showed it to my quilting friends at our Tuesday morning get together.  They convinced me to finish it and enter it into our upcoming quilt show.

So I began working on it, just as Mimi was losing her battle with life.  It seems fitting that I should be working on this quilt through all my stressful times.  It has been my way of dealing with illness, both my own and Mimi's.  And now that I am almost finished I feel energized and rejuvenated.  I will have it long arm quilted and it will be ready to enter into our guild's quilt show.  I can't show you all of it right now, but this is what I am working on at the moment.  Lots of scraps and applique. 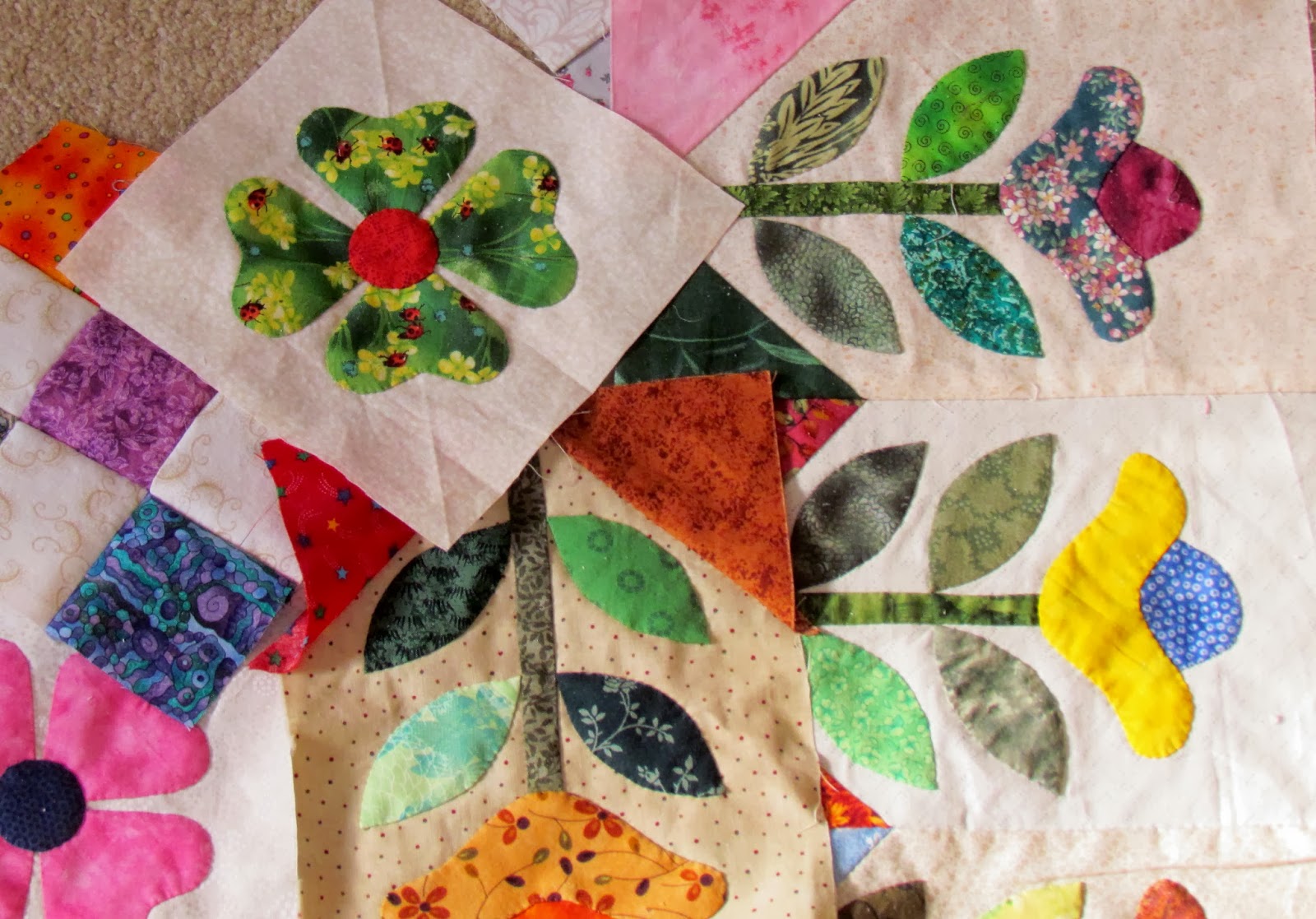 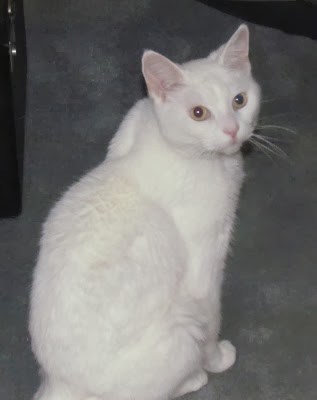 We lost our sweet kitten, Mimi, today due to age and heart problems.  She passed away peacefully as I held her in my arms.  Gone now but not forgotten.  She was the best furry feline we ever had.  My heart aches.  There is no way to describe the sadness and pain I feel right now.  But at least Mimi is no longer suffering.  She can breathe easily now as she romps and plays with her furry friends in the cat here-after.  Farewell, Mimi.  We will always love and miss you.﻿
Posted by hetty at 12:05 PM 13 comments: