On May 7th, I went back to Sunnybrook Hospital to see the chief neurologist there. I had some more tests done in the EMG lab. The neurologist was flabbergasted by the results of those tests; my legs were getting worse! Doh! I could have told him that without any painful nerve conduction tests!
He was puzzled by my diagnosis. He had originally thought that it was a spinal problem, complicated by a very recent diagnosis of Type 2 diabetes. If that diagnosis had been correct, I should have been getting better over the previous 2 and a half months, but I was getting worse. After consulting with his staff, he concluded that my condition was caused by my autoimmune system. To put it in layman's terms, my blood cells were attacking my nerve cells as if they were foreign invaders! He told me this condition would only strike one in a million people. Too bad I didn't buy a lottery ticket. He decided to admit me immediately and start me on a course of steroid treatments given directly into my blood stream. Unfortunately there were no beds available at that time. I was sent home to wait for a call from the hospital. Finally, the following Monday morning I was told to return to Sunnybrook to be admitted. My stay at the hospital remains like a foggy dream that I couldn't wake up from.
It felt as if I had been abducted by aliens! I was probed and prodded, scanned and scoped. Blood was drawn daily for god only knows what. My fingers were pricked to test my blood sugar levels. Dyes were infected into my veins. A course of five steroid treatments was started. I was told I would feel good and energetic, but instead, I became moody and tired.
Every night was a challenge to sleep as the others in my room dealt with their own pains and suffering. I wondered how long I could take this treatment.
When the steroid treatment was completed, the neurologist returned to my bedside. I had a million questions for him, but he could not answer any of them. He still was not sure if I had been diagnosed correctly. He was not sure if the steroids were the right treatment, and he could not give me any definite prognosis. I asked for more nerve tests, but he said that they would not show anything. Apparently nerve cells grow very slowly - only about a millimeter per day. I would have to wait at least 3 months before any result would show up on the EMG tests.
It was decided that I would go to a rehabilitation hospital to strengthen my muscles and learn to walk again. But that meant I would have to wait until a bed became available. so, I waited and waited. Each day went by without a light at the end of my long dark tunnel. I was not supposed to get any more medical attention, yet I was still prodded and probed, pricked and swabbed. A physiotherapist gave me exercises to do while I waited. I was surprised at the amount of strength and mobility I had in my left leg. It seemed as if the steroids had helped - at least a bit. But my right leg, which had always been my strongest, was totally useless. All of my muscles had wasted away. I struggled with every minute of my day. I practiced my exercises and slowly made my way to the bathroom with my walker. I was a very impatient patient! But then the good news came!
The social worker, who had arranged my rehab, together with the physiotherapist, came to my bedside. They had curious smiles on their faces. Had my wishes come true? Would I be moved to a place where I could get better? I dared not hope!
"Good news?" I asked.
"We have found a bed at West Park Health Care Centre. Do you want to take it?"
Did I want to ? You betcha!!!
I was transported by ambulance on the following morning. And so ended my abduction. I checked my body for scars. I found lots of bruises, but I was not missing any vital organs. All was well.
More next time on my stay here at West Park. Right now someone is waiting to use the computer. Till then.
Posted by hetty at 11:02 AM 3 comments:

Hi Folks! I'm back on the computer.
All is well. I am in a rehab hospital at the moment, but I have use of a computer in their library for about 20 minutes. I will write more tomorrow.
Posted by hetty at 1:02 PM 1 comment:

I spent my day at Sunnybrook Hospital yesterday. It is one of the best hospitals here in Toronto! My neurologist is Head of the Neurology Department, so I think I am in good hands. I had some more test done and then we waited for a bed. My doctor thought that I should be admitted immediately. Unfortunately they did not have a bed available! So much for all the cutbacks lately!! We went home and now I am waiting for a phone call to tell me when to come back to the hospital. I hope it will come today. I want to get this stuff over with!
I know that I haven't said much on my blog about my condition, but it has not been good lately. Since about a year ago I have totally lost the ability to walk. I am suffering from a lot of nerve and muscle pain and I can no longer put one foot in front of the other without the use of my walker. Sometimes even that doesn't work. Like about a week ago when I fell down as I 'walked' to the bathroom at 4:00am in the morning. I bruised my left foot very badly and have not been able to put my full weight on it since. Needless to say, I have not been able to walk at all since then. So now I have to sit in my wheelchair to get from one room to another at all times. I am too afraid of falling again. Yesterday, when I was at the hospital, the neurologist I was seeing told me that he is very puzzled with my condition. He has tentatively diagnosed me as having an immuno disorder. Apparently this is not a common disorder - only a chance of about one in a million of getting this! When I go back to the hospital today I will have to start some kind of steroid IV treatment. And maybe some Intravenous Immuno Globulin or something. I am not looking forward to that, but I know that things can't go on like this. Something has to be done! 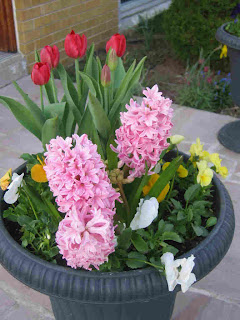 So for the time being, I will just have to think positive thoughts, like those of the beautiful flowers that are growing in my garden. Too bad I couldn't take photos of all of them. It is too difficult to get around at the moment! But here is one of the urns I managed to plant a few weeks ago. These beautiful plants welcome all visitors to my front door. Because they are a couple of feet tall, I was able to reach them without any problems. I also planted a few other pots and a large container with some lettuce! I can hardly wait to enjoy a nice fresh salad - maybe in a few weeks or so! 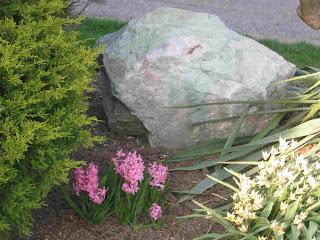 Anyway, for the time being, these images will have to feed my psyche. I will need all the positive vibes I can get to make my way through all this treatment and hospital stuff!! Oh, did I tell you that I do not like hospitals! I guess there is no need to do so. No one likes hospitals!! Wish me luck. I hope to be back soon with some new creations.
Posted by hetty at 7:44 AM 2 comments: