We have had a wonderful Christmas! Lots of hosting, visiting, cooking, baking and eating! And now it is back to 'sort-of' normal. I have finished the last three blocks in the Friday Block Party. I thought I'd better get them done seeing as how I am the one who is posting the blocks each week for the year 2010. If anyone is interested in joining our party, let me know. I have no idea how to add you to our blog, but I'll figure it out.

This first block is called Double Hourglass. It was for week 50. It is a 9inch block. I didn't follow the instructions very well. I made the hourglass units in groups of two, so I ended up with four of them. I only needed three, so in order not to waste a unit, I put a novelty print in the centre and put the hourglass units around it. This created a whole new block, but it is in keeping with the novelty 9in. blocks I have made in the past. I hope to make all of the 9in. blocks into a baby quilt soon. 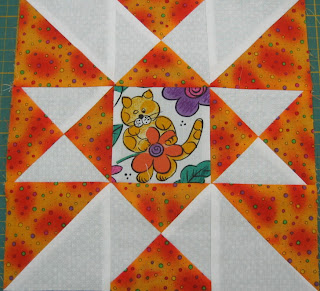 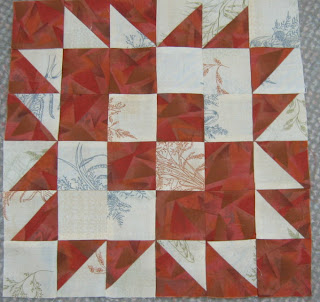 And this is the block for week 52. It is called Double Cross. It is a small 8in. block. It was easy and quick. So now I have finished all of the blocks for 2009! That means I have 52+ orphan blocks in my collection. I think it's time to put together some quilts. Don't you? 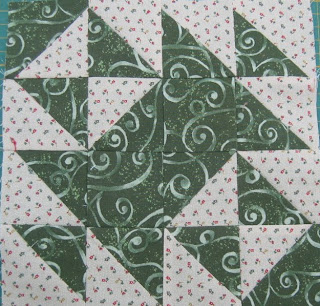 that last one, I always called spool, not double cross. I know a lot of blocks have more than one name.

i love the red cat.
sppoky likes red cats too.
:)

I agree with Mrs Ecuberant Color! The second block is really wonderful!

oooh i like the green block! i look forward to seeing you put all these blocks together. :)

You've done a great job with these. Do I understand that you are doing another set of these each Friday in 2010???

Fun blocks. I love the cat! You've been so good to keep up with these.

You are truly dedicated.....so are you hoisting the Friday Block party for next year?

Hetty ~ The blocks are so colorful & pretty. What are you going to do with them next?

Have a beautiful & blessed New Year. I so appreciate your friendship.

I will be in & out of communication for the next couple of weeks.
TTFN ~ Marydon