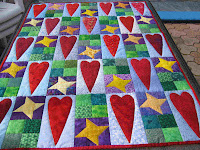 I feel like a murderer, a serial killer of sorts. Because of me at least 10 rats are dead. I didn't really do anything, but that is what has happened. I am taking full responsibility. I had a compost heap in my backyard. Over the years I had fed it well. My ever consuming need to be 'green' had me putting all of my kitchen scraps and yard waste into that bin. It was huge!

A couple of summers ago I saw a big rat run from the compost to my apple tree. Then a few minutes later I saw it run from the apple tree back to the compost bin. I decided at that moment not to put any more kitchen scraps into the bin. After all, we have a compost recycling program. Each week all of our kitchen scraps are collected and composted by the city. It seems to be working well. I didn't need to attract rats to my backyard. So, I decided that I would not put any more food scraps into my bin! But it seems that the rats did not really care if I did or not. They liked my bin and made themselves at home. Kind of like a rat condo! Last week the neighbour who backs onto us, told me that he had seen rats coming from the wall between our properties. He was very upset about it. He told me he was going to poison them. That's when I decided to get rid of my compost bin altogether. If the rats couldn't live there, they would have to move somewhere else. And if they moved somewhere else, they wouldn't be poisoned. It seemed like a good plan.

Yesterday was the first nice day in which we could move all that compost and spread it on the garden. Up until now we have not had any nice weather. The ground was still frozen or too soft to work in. My husband was not eager to empty those bins. But when I was sitting in the backyard, surveying my garden domain, I suddenly looked down, and there, about 3 feet in front of me, lay a dying rat! She was breathing heavily and her face had blood on it. I carefully moved her out of the direct sun and put her in a secluded place in the flower bed. But she apparently didn't like it there because I later found her back on the hard concrete patio. It took another agonizing hour before she died. That finally convinced my husband that those compost bins had to go. We started digging and sifting. It was back-breaking work. We spread the compost out on the vegetable garden and other flower beds. We put some into bags for later use. Then just as we were about half way through the second bin, out fell a rat's nest! I have often used the term 'rats's nest' to describe someone's messy hair, kind of like 'bed head', but this nest was actually very neat. Inside were 9 tiny babies. They were totally naked and their eyes were shut. Unfortunately they were also dead. I fear that their mother may have eaten the poison my neighbour set out and that she transfered the poison to her babies through her milk. I felt very sad. If I had gotten rid of that stupid compost bin a year ago, this would not have happened. So I am a murder! I didn't mean for it to happen, but it did.

Next week we will finish emptying the last bin. I hope we don't find anymore dead creatures. And after that I hope that no rat will ever find my yard a good place in which to build a home.
Hetty

Meow! What's all this rat nonsense?

All this talk about dead rats! In my opinion, a dead rat is a good rat! If she (my owner) had just let me out, I would have eradicated those stupid rodents long ago. But on second thought, maybe I wouldn't want to dirty my paws - or other parts of me! I could break a nail!
But sorry, she'll get no sympathy from me! And what am I supposed to look at now to keep me occupied? Stupid rats! Meow!
Mimi
Posted by hetty at 4:53 PM No comments: 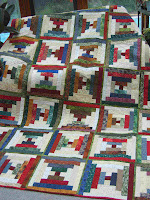 This quilt was done in a quilt-as-you-go style. Each block was pieced and quilted in one step. I started this quilt several years ago in a class at a local quilt shop. After a few blocks, I didn't like the technique, so the finished pieces and fabric ended up in a plastic bin at the bottom of my closet. Then, one day I had the brilliant idea to put them together using a technique that I had tried on another quilt. It worked! I was able to finish all the blocks and join them together. This quilt was meant to use up a lot of my stash. And, I am happy to say, it did! 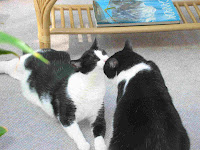 Ah, how good it feels. The tongue of a good friend. 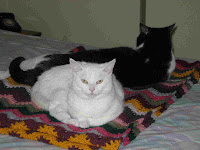 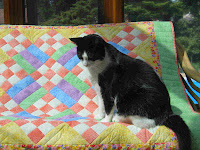 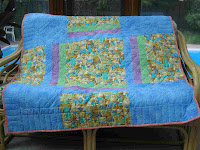 I think it is about time that I add a few quilts. I made this one, called 'Citrus Punch' last summer. The front is done in rail fence and 9-patch blocks, arranged on point. The colours reminded me of citrus fruits, hence the name. The back is done in a huge 9-patch. I used some of the strip pieces which I had left over from the front. This 'back art' is very rewarding to do. It's like getting two quilts in one. Oscar jumped right up onto the quilt when I tried to photograph it. Therefore it's Oscar approved!
Posted by hetty at 11:03 AM No comments:

Felix According to Mimi 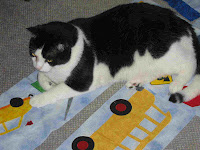 We sometimes don't agree on things. We often have arguments. Last week Oscar came to my rescue and bit Felix in the neck. Our owner was livid! She hates it when we argue. She yelled at them, and Oscar tried to pretend that he had done nothing wrong, but there was a big tuft of fur sticking out of his mouth. And later, when Felix finally came out from under the bed, he had more loose fur on his neck. He seemed to be unscathed though. I really don't want to see them hurt each other. Especially not on my account!
So even though we argue about many things, there is one thing that we can all agree on - and that is a good quilt! This photo is of the beginnings of a quilt my owner is making for a young boy who loves cars and trucks and other construction vehicles. Felix likes it too!
Well, so much for my 'brothers'. I must return to my napping! "Hey, you stupid, black, furry thing! Get off my favourite chair!!!!" Oh, don't you hate it when someone steals your spot when you get up? "Okay, just keep it warm for me then! I'll be right there!" Meow for now. Love, Mimi
Posted by hetty at 8:44 PM No comments:

A Philosophic Moment According to Oscar 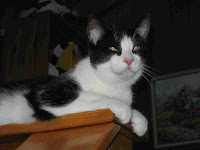 Some cats are wise and some are otherwise.

This is Oscar. And this is the bannister that I was talking about - the one he fell from. That cat is so dumb! He fell off and went right back up there again. Meow, Mimi
Posted by hetty at 8:39 PM No comments: 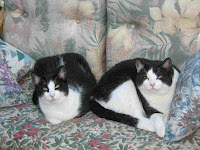 Friends: one mind living in two bodies.
That makes these guys halfwits, right?

Meow! I think it is time for me to introduce my 'brothers'. They are a real pain in the backside sometimes, but at other times they make me laugh! Especially the time when Oscar fell off the bannister! OMG, I almost wet myself! It was sooooo funny! They were neutered and de-clawed long before they came to live with us. Just as well. They are too big to be using their claws on the furniture. And I don't want them touching my scratching post! That's a personal thing! Oh, I almost forgot. Their names are Oscar and Felix. Meow, Mimi
Posted by hetty at 8:26 PM No comments: 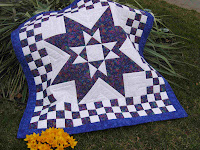 I found this quilt in a magazine and decided to make it as a sample for a class that I hope to teach soon. This project will include such skills as rotary cutting and strip piecing. It will also teach students how to make quick and easy half-square triangle blocks.
I took the photo of it on my front lawn. Actually, that was just an excuse to get a shot of some of my crocuses that are already blooming on the lawn. This photo was taken on March 30th. That's early for anything to be flowering here in Toronto! I am quite proud of my little blossoms! Now my only concern is how to protect them from my 'enemies' the squirrels! They love to dig up my bulbs. I can tell when they have been in my garden because I find little holes dug into the dirt, and little plant parts all over the place. If they would just eat everything they dig up I might not mind so much. Guess I'll have to go out there with my cayenne pepper. They are supposed to hate cayenne pepper! With my luck I will probably have little hot-assed squirrels with a taste for cayenne.
Mimi wanted to add a few words to my squirrel post. But she is sleeping right now. Now and always! I'll get her to write something tomorrow.
Hetty
Posted by hetty at 1:39 AM No comments: