I am proud to be a Canadian.  But not so proud of all the things our country has done throughout the past 150 years.  The Japanese who were living in B.C. and considered themselves to be Canadian were not treated very well during the Second World War.  Our native peoples have also had a bad rap.  From residential schools to having their lands taken from them.  They were here first, bat that didn't seem to matter.  'O Canada our home on native land'.

In the 1920's there was an advertisement in one of the Maritime newspapers for the sale of a slave.  And we thought slavery only happened south of the border.

The Chinese built our railroads.  In the 50's Italian men were recruited for the construction industry. Jews were often discriminated against.  We begrudgingly allowed a boatload of Tamils onto our shores when they had no where to go.

And now the newcomers.  Will they be treated alright.  It seems that way so far.  But who knows what will happen in the future.

I immigrated with my family in 1957.  I was almost 9 years old at the time.  I didn't want to leave The Netherlands - my grandparents and aunts and uncles and my school friends.  I thought I would never see them again.

I spoke no English and had to attend a new school.  Everything was new to me.  I thought I would hate it here.  But then I saw the stores.  You could buy a gallon of ice cream and keep it in the fridge.  This was new.  We never had a fridge in Holland.  I thought I had died and gone to heaven.

I learned to speak the language without any problems.  I was able to go to the library and borrow books.  That was exciting,  I made new friends.  It was all good.

We became Canadian citizens three years later.  Now I wouldn't want to live anywhere else in the world.

I was working on a few red and white quilts for Canada Day.  But they didn't get done.  I am also busy putting the finishing touches on a couple of baby quilts that have to be done next week.  I also have a few flag pillows that I am working. on.  Also, not done.  But I did manage to go to Sheridan Nurseries last week and buy a couple of flag plows.  Here they are.  I love these things. 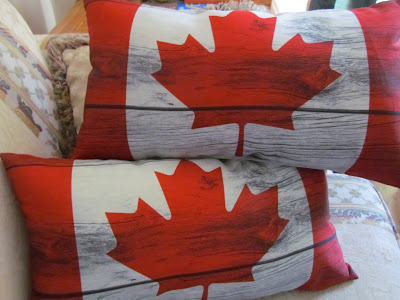