When Life Gives You Rain

Our weather is crazy.  Rain, rain and more rain.  Everything is flooded.  The Toronto Islands are swamped.  Sandbags everywhere and still the water in the lake continues to rise. There are gigantic carp swimming in the baseball field.  Ducks have taken over as have the Canada Geese.  Rouge Beach at the end of Lawrence is flooded.  If you go there don't expect to get a parking space.  The water has overflowed and the whole park is a swamp.  It's the same everywhere.  I am straining to keep my garden alive, not because it is dry, but because it is too wet.  My plants are rotting.

But with all this rain. I have been busy in my sewing room..  I am making two baby quilts that I can't show yet.  One has to be done in the first week of July and the other one should have been completed in March.  I'm working on it.

Also working on a red and white quilt for Canada\s 150th birthday.  I found it when I was cleaning up,.  It was originally meant to be a wheelchair quilt, but my mother has since died.  So I decided to make it a bit bigger. 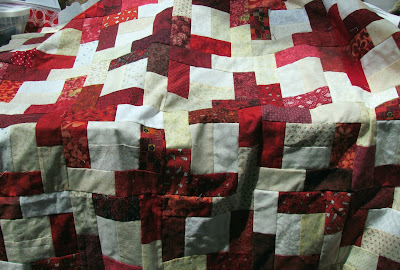 I thought I had completed required number of blocks, but then it seemed as if I didn't have enough.  I knew they were somewhere in that mess of a sewing room of mine.  So I spent the day yesterday cleaning up and low and behold, I found the missing blocks.  I think I will make a few more and make my quilt even bigger.  But then I will have to have it quilted by my longarmer.  I hope she can do it before the 1st of July.

I have also been working on a scrap quilt.  Little 1.5 by 3.5 scraps.  I thought I had millions of them, but now I have run out.  Time to put this baby on hold until I have some more scraps. 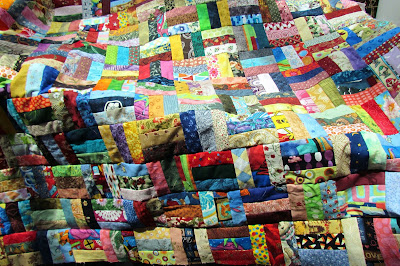 And another ongoing scrap project that was in my way.   More on this one later. 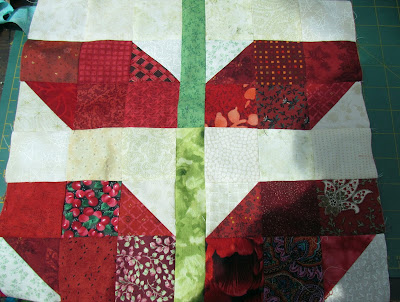 And here is a scrappy Canadian Flag.  I saw this on Pinterest and decided it had potential.  Don't know what though.  Any ideas? 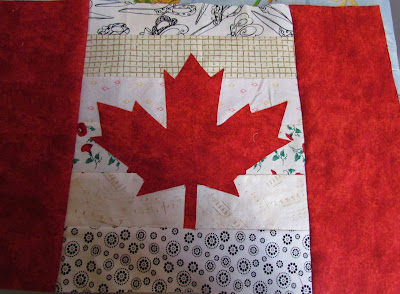 ﻿
﻿
As you can see, the sun was shining when I took these photos.  But the sky was thundering and the rain was pelting down.  Like I said, "Crazy weather".
﻿

We have had rain, rain and more rain.  For a whole week, nothing but rain.  The homes on Centre Island are being washed into the lake.  The beach at Ashbridges Bay is swamped.  Even as far out at Bowmanville the waters threaten the houses and sandbags need to be used.  It's the same in Quebec.
But now the rain seems to have stopped.  At least where I live.  It is very cold though.  We had frost last night and will likely have more of it tonight.  But I have kept warm, dry and busy this past weekend. But now I am exhausted.

On Saturday I went to the Rouge Valley Quilt Show.  I used to be a member, but when they changed venues, it became too difficult to get in and out of the church.  It was not wheelchair accessible.  There were no elevators and I could no longer walk up and down the stairs.  Unfortunately I had to quit, but when I heard they were having their quilt show I decided to go to the community centre to see my old quilting buddies and the gorgeous quilts that were on show.  I wanted to take lots of photos, but it was too difficult to get a good picture from my wheelchair with all the visitors that were there.  I did take a photo of Sandy Sinoco's hand appliqued quilt.  I love her work.  It is all hand done. It's gorgeous, wouldn't you agree? 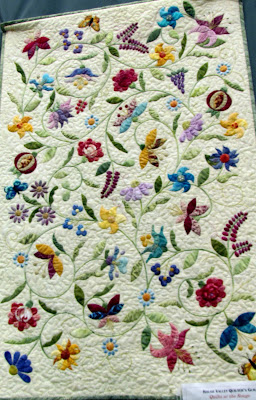 Then on Sunday my daughter wanted to take William to Vandermeer`s.  It`s a garden centre.  I love that place and I went with her.  William only went to look at the fish and turtles.  He just loves those fish! 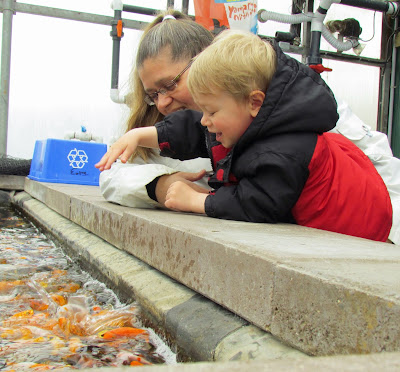 It was a fun day.  William enjoyed himself and I bought a few perennials.  ﻿
﻿