I am still reeling from my broken ankle.  But I just had to make this little alphabet quilt for a teacher friend of my DD's.  She is having a baby in a couple of months,  ﻿ 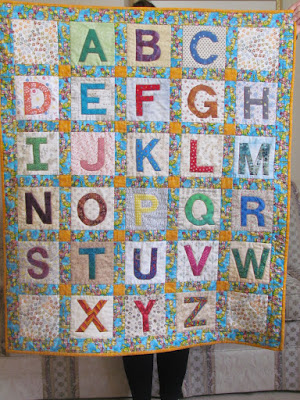 It only took me a few days.  The letters are machine appliqued.  The most difficult part for me was trying to download a photo. to this post.  This is not the photo I wanted to add.  My computer is still giving me troubles.   But I guess it's better than nothing.
Posted by hetty at 11:58 AM 2 comments: 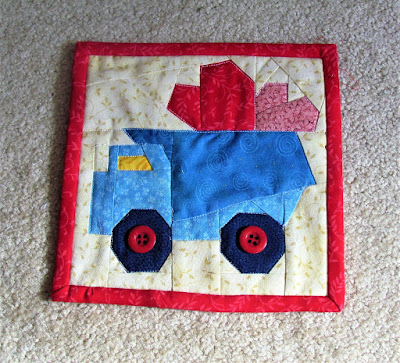 And this week's Canadian Quilter's Association block.  I had heart fabric on my cutting table so I used that. 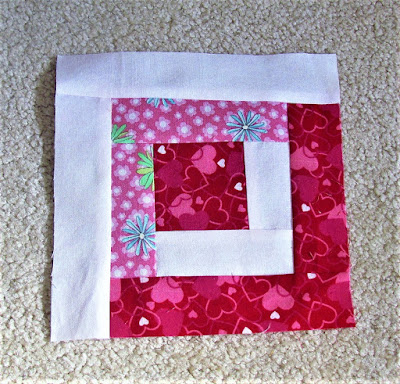 Some of This and Some of That

Just a quick tutorial on the red quilt.

I made a few more blocks for the red quilt.  I also found a blue block.
It is very old.  I have lots of blue scraps, so I made a couple more blocks.  This is how the block is constructed. 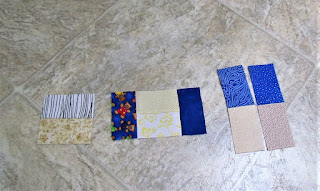 Two light pieces are sewn together,

Then a dark piece is attached to each end of the light block.

A light piece is sewn to adark piece to form a long section. 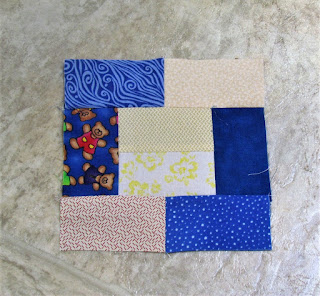 All blocks have to be constructed the same.  The pattern on the quilt is accomplished by alternating the blocks.

I like the colours.  I think this will become my leaders and enders project for a while.


I also made a few more hats. 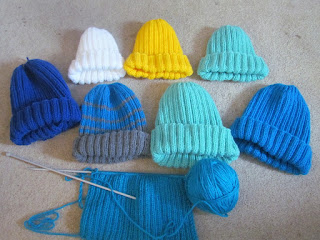 Still have some to finish.  I found a new pattern on the Caron website.  The hats range from toddler to adults.  The white one is a toddler size.  The yellow and aqua ones at the top are youth size.  The rest are adult.

I worked on an Alphabet Book for William.  I still need to bind it.  But here is some of what I have. 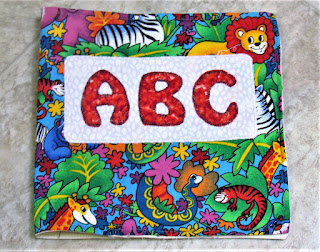 This is the cover. 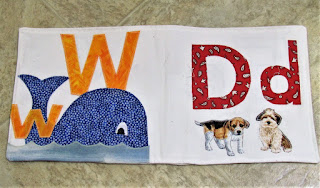 W is for William.  This was the first page I made. 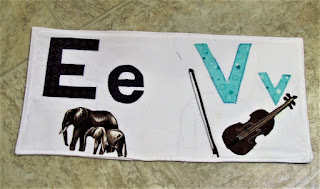 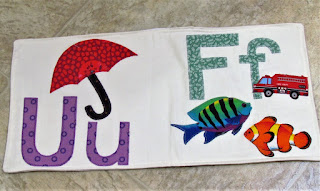 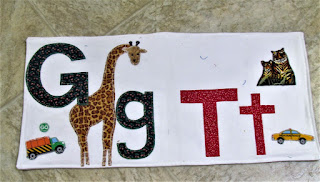 And tigers and giraffe's.

I also weakened and joined the Canadian Quilters Association for their 52 blocks in 52 week.  Here are the first 4 blocks.  I am making mine scrappy. 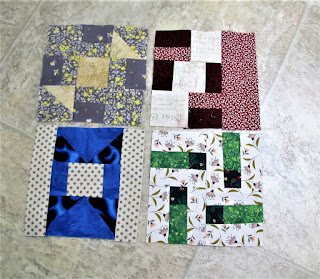 Well that's all for now.  Till next time.

This month's colour on the rainbow scrap challenge is red.  I have been working on this flimsy for a long time.  I thought it was just about done.  But I think I need to add a few more blocks.  Right now it measures 72in by 59in.  I want it to fit a twin bed, so it needs to be longer.  I will have it long arm quilted when I reach the right size.  I just can't do thid big stuff any longer. 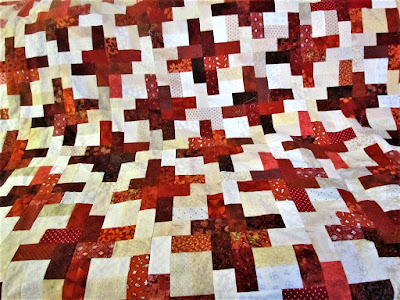 Also red is my Amaryllis.  The first bud opened last week.  This week a second bud has opened.  And there is a third bud.  Never had that happen before.  It will probably open next week. 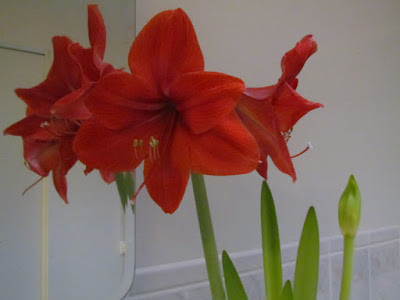 Linking up with soscrappy.

A Few Things I Have Been Working On

I wanted to make some Christmas presents.  But that didn't work out.  I got sick.  So nothing got finished.  Except this pillow case.  William loves it! 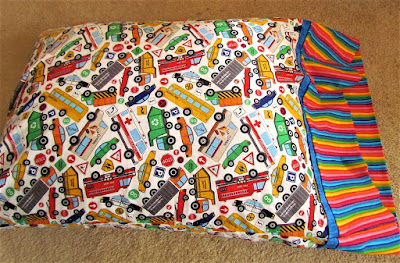 I have been doing a bit of knitting.  A few weeks ago I took Wheeltrans to go to the Scarborough Town Centre.  There was already someone else on the bus when I got on.  We started talking.  (It's what I do best.)   We discussed hobbies.  And she pulled a knitted hat out of her bag.  She said she had made over 400 of these in the past years.  She  donates them and they are well received.  These little hats use up all kinds of left over yarns, which I have lots of.  So I asked her for instructions and started to knit some hats while I was sick.  They were easy to do while watching television and in between taking a nap.  I have made 3 of them so far.  Each has been a learning experience and so far there is not even a dent in my scrap yarn bin. 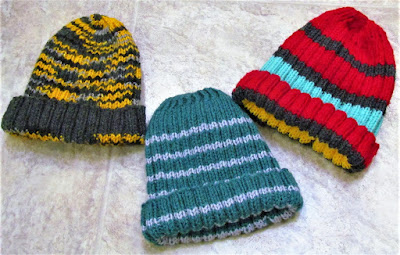 Now that I am feeling better I will work on some of the Christmas presents I couldn't finish.  But I will use my evenings to knit more hats.

Cats I Have Known and Loved - Feline Friday Special Edition

Sarah from Sarah did it posted a wonderful entry about the cats that have made her life better   She invited others to do the same.   So here I go.

I have always been a cat lover.  I had a very large tabby cat named Puss when I was growing up.  Sorry, I have no photos of him.  I don't think I even owned a camera at that time.  But I loved him just the same.

When my kids were young we got a white cat from a friend's litter.  My daughter named her Snowflake.  We just called her Flakey.  She was a terrific cat.  Unfortunately she passed away when she was only 13.  It was very traumatic. 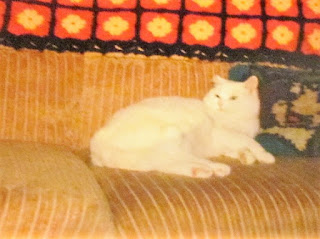 We decided to get another cat and Rascal came into our lives. 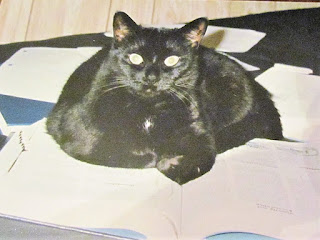 We got her at an animal shelter.  It was love at first sight for my DD.  It took us a long time to name her.  She could be very naughty at times, so we called her Rascal.  Rascal gave birth to three kittens before we could get her spayed.  She lived to a ripe old age of 18.

And that's how Tobicat and Daisy Mae came into our lives.  They were two of Rascal's kittens.  The third kitten went to live with my sister. 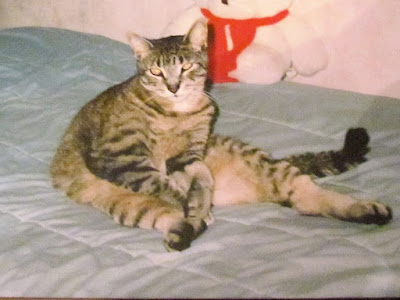 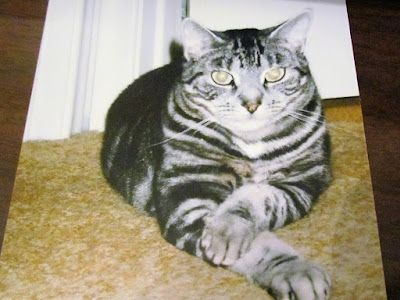 These kittens were a wonderful addition to our household.  They were well-behaved and comical.  Tobicat had some major health issues.  He was an outdoor cat.  When he got sick the vet feared that he had been poisoned.  We think he drank antifreeze from the driveway.  His kidneys were destroyed, but we kept him alive for many years by injecting him with a saline solution under his skin.  He lived to be 17 years old.

Daisy Mae was a quiet, gentle cat.  When she was only a couple of months old, the neighbour's dog chased her to the top of the telephone pole in front of our house.  She jumped down and miraculously didn't injure herself.  Perhaps cats do have nine lives.   She lived to be 19 years old.

The next kitten we got was Mimi. 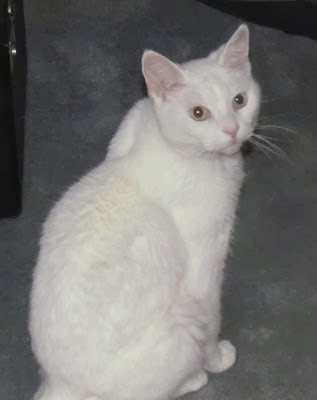 My mother found her on the road in cottage country and brought her to us. She was so tiny when we got her.  She fit in the palm of my hand.   Eventhough I loved all our cats, Mimi became my favourite.  I used to have her contribute to my blog posts.  She was a very smart cat.

While Rascal, Tobicat, Daisy Mae and Mimi were still alive my son begged me to adopt a couple of cats who were going to be put down.  The couple who owned them didn't want them anry longer.  They had been kept in a closet and had never even been given names.  What could I do?  So I took them in and named them Felix and Oscar - the odd couple. 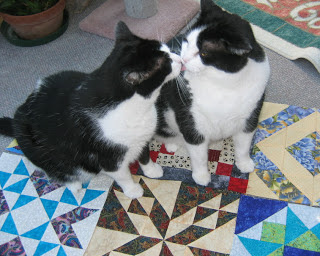 And odd they were.  And frightened.  Felix hid in the basement for several months, coming out only to use the litter box or get some food or a drink of water.   But as he got over his fear he began to stay by my side every minute of the day.  He slept on my bed at night. 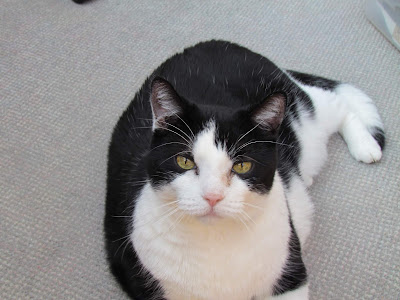 We never found out how old they were.  But they had been neutered and (ouch) declawed.  They were also the biggest cats I had ever seen.

But they all got along nicely.  Little Mimi and her big brothers.  After all the trouble with Tobicat and his kidneys I decided any cats we had from then on would have to be indoor cats. 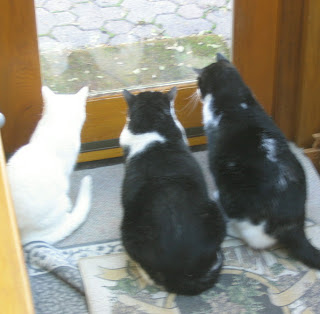 Looking and longing to go outside.

Oscar had a seizure one very hot summer's day and passed away.   We missed him terribly. He was such a funny cat. 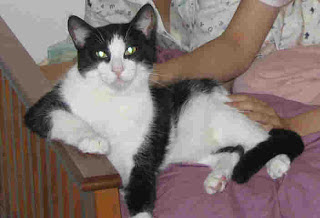 For a short time my DD adopted a couple of white cats from the animal shelter .  They lived with us until she moved into her own home.  Their names are Patty and Shroeder.  Patty is a white cat with blue eyes.  And as is often the case, that combination  produces a cat who is deaf.  Patty still lives with her.  Here is a photo of little William when he was very young with Patty next to him. 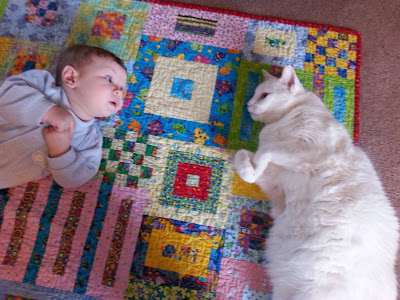 Shroeder proved to be too much work for DD.  He kept wanting to go outside.  And he didn't like William too much either.  So my son took him to live at his house.  Shroeder was very happy about that. 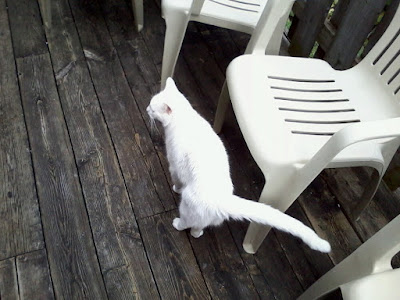 We have had other cats who lived with us from time to time. Some when their owners were away or ill.  I loved them all.  I am grateful for all the felines who have graced my life.  They make everything okay.  Now I only have Felix.  And he is getting old.  I may have to adopt a little calico from the cat rescue place.  That would make my life complete.

I am linking to Sarah did it.

This has been my 'go to', relaxing project over the past few weeks.  I made some more string blocks last Friday,  These things are so addictive.  And so much fun!  I have enough strips to make two more quilts after I finish this one.   LOL  My scrap bag is still half full. 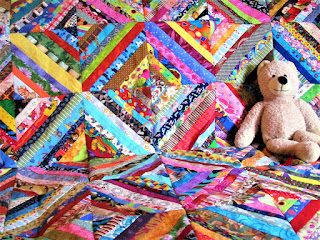 So far it measures about 42 X 49 inches.  I want to make it at least a generous twin size.  Then I plan to have it longarm quilted.  Just can't do anything bigger than a baby quilt any more.