Okay! Tonight is the night! I've been looking forward to this for a long time! My broom has had a tune-up and the oil has been changed. A few parts - mine - have been greased and lubricated for my yearly outing!!! Look for me as I fly by tonight. Brooooohaha!!!
I am planning to paint Mimi black and take her with me. She is not very happy about that! I may have a fight on my hands! I would take Felix because there is less to paint on him, (he is already mostly black) but he is also very heavy and I am afraid I would never get off the ground!
Happy Halloween!
Posted by hetty at 11:46 AM 1 comment:

Yep! It's Officially Fall Around Here! 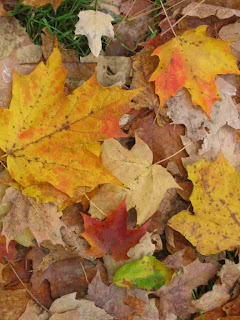 The weather has changed. And so have the trees! It sort of happened overnight while I was sleeping, I guess! Until now I thought we would have summer right into January. It's been so hot! But what a difference a day can make!

Last night the temperature went down close to freezing! When I got up the sun was shining and I decided that if I was to get any photos of our beautiful fall colours, I would have to take my camera and go out this morning.

By the time I got to the park, clouds had moved in, but I decided to forge ahead with my leaf photo quest. There would not be many days left in this short autumn season.

The first place I went to was Bluffer's Park. I have always loved this place and today was no exception! It looks so rugged. This photo really doesn't do it justice! A bit of sunshine would have been helpful. But there wasn't any and the temperature was very chilly down there by the lake. The thermometer in my car read, "7C". Brrr! I could see the waves of Lake Ontario breaking on the shore. Sorry, no photo. It was too cold to get out of the car and walk along the beach! Besides, I probably would have fallen and not been able to get up! Not a good thing! I decided to stay close to the car and parking lot. 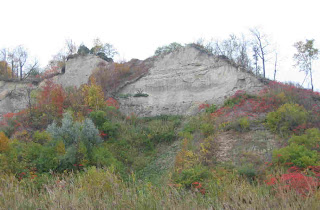 There were lots of geese down by the boat landing area.

Someone was feeding them. I wish people wouldn't do that! Those geese will likely spend their winter half frozen in the cold waters of the lake, instead of flying to some nice warm place down south. 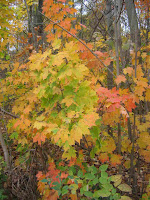 The trees in the park were almost devoid of leaves. But there were still a few nice specimens along the bottom of the bluffs. I guess the winds are stronger down near the lake and the temperature is much colder! So cold, in fact, that I decided to leave Bluffer's Park and drive to Morningside Park instead.

It was not much warmer there either, and there were not many leaves left on the trees.
Most had fallen, making a nice leafy path to follow through the trees. 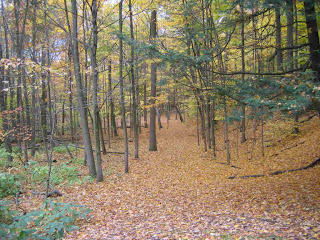 I stayed close to the paved areas in order to make walking easier. It was a great experience to wonder around in such a natural setting. I hadn't realized how much I had missed doing that lately. I will try to get out more often now that my daily pool exercises seem to be working! 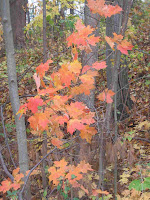 There was no one else in the park! I was alone with the squirrels and geese! It just doesn't get any better than that! I could actually hear the leaves as they glided through the air and landed softly on the ground. 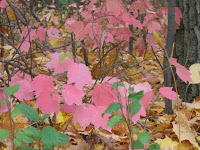 I found some nice purple coloured maple leaves. They reminded me of the time when I was still working in a Special Education class and we were discussing fall colours and the changing leaves. One boy insisted that the leaves turned purple. I let him have his say, but I was skeptical because I didn't think that I had ever seen a purple maple leaf! But here was proof! I wish I had some fabric in this lovely colour! What a gorgeous quilt that would make! 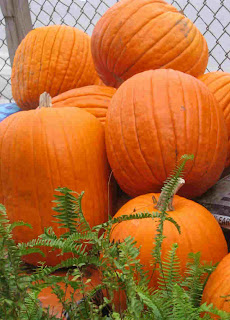 On the way home I drove past a fruit and vegetable market. The pumpkins were piled high on top of each other. Huge mountains of pumpkins! Their bright orange colour pulled me and my camera towards them. "Come", they called to me. "Don't you just love our bright orange complexion? Come and photograph us." I just couldn't get enough photos, but I will only bore you with one!
I thought about buying a pumpkin to take home with me - a sort of souvenir of my morning outing. And, after all, Hallowe'en is only a few days away. But when I saw the price tags - WOW! $19.99 for a pumpkin? I think I will get mine at Loblaws. I saw some rather small, misshapen ones there last week for only $1.99. Who needs a perfect pumpkin for a Jack-O-Lantern anyway? The odd shaped ones make the scariest Jack-O-Lanterns! Don't you agree?
When I arrived home, the sun had still not come out! In fact, it didn't make an appearance until late in the afternoon when I was in the pool at the Y. Too bad I didn't have even a small ray of sunshine to help me take my photos. But, oh, well. The sun reflecting off the waves of the pool water was nice too. I pretended I was on an island, far from the late days of autumn, enjoying the warm waters of a tropical pool. 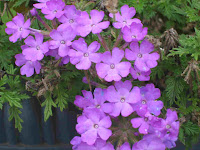 A small urn of purple verbena greeted me when I arrived back
home. Soon these too will wither and die. But for now they provided me with some colour. And along with the colours of the beautiful leaves I saw today, will provide me with energy to carry with me through the long winter that is definitely ahead of us. 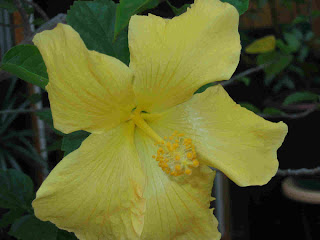 In the past two days we broke records for the warmest temperatures on record. It was 26C on Sunday and 25.1C yesterday. We wondered if this summer was ever going to end! But today fall has finally begun. It is cold and dark and raining. Tonight there is a chance of night frost! But inside, my solarium is like a miniature tropical garden. I have organized and placed the plants so that there is still room for us and our felines - not an easy task! It is warm and dry in there, with peaceful places for cats to curl up and nap the day away - under green leaves and spreading branches. And, bonus! I found this wonderful hibiscus this morning - blooming happily inside, oblivious of the dark, dreary weather outside!
Posted by hetty at 10:50 AM 2 comments:

The Princess and the Peas 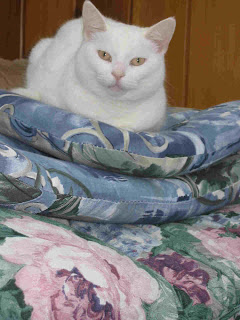 Everything is being moved inside this weekend. It is getting too cold! Our summer is over! The pool is already covered and the tropical plants have been placed in the solarium. Last night the temperature went down to 4C! The beans have all been picked and we will have the stir fry I promised myself for dinner tonight! Most of the tomatoes have been picked, but I left some of them on the vines in hopes that they will grow a bit bigger, but I doubt if that will happen. I think we will have frost before then. We have already had to turn on the furnace! It is hard to believe that only a week ago we set a record for the hottest daytime temperature when the mercury went up to 32C! Mimi doesn't mind! She is taking full advantage of the chair cushions that will eventually have to be stored in the basement until next spring. But for now she is the Princess and the Pea, as she sleeps, high on a pile of cushions, in the back room!

Meow! Okay, don't bother to move these cushions! Just leave them here for me! I love the high vantage point! I can see out over all of my domain! And it is all mine! And bonus! My pesky 'brothers' can't bother me up here! Meow! Love, Mimi
PS. Oh, by the way, could you please remove the book that was lying on the chair before you piled the cushions on it. It is hurting my back! Thanks.
Posted by hetty at 11:15 AM 2 comments:

New Plants in My Garden 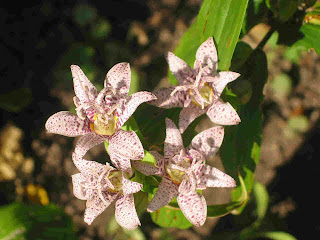 Look what I found in my garden this week. Toad Lilies! Until last spring, I had never even heard of them. I found some plants at a sort of up-scale garden centre. They are considered woodland plants - that is, they do well in moist, shaded areas under trees and shrubs. Since I have lots of places like that in my garden, I decided to buy a couple of plants and try them out. They don't flower until the fall, but when they do, watch out! They are absolutely stunning! Each flower is only about an inch in diameter, but the plants are covered in them. 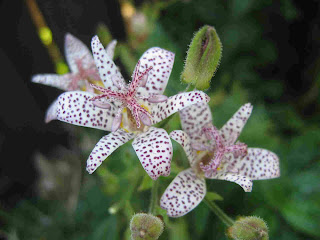 I will have to see how they survive our cold winters. If they do, I think I will add a few more to my garden next year. It is so nice to have something as pretty as these little lilies flowering when almost everything else in my garden has already given up and died back for the impending winter!
Posted by hetty at 11:40 AM No comments: 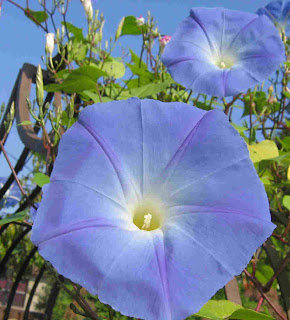 Well, that just about sums up my mood today! But aren't these morning glories beautiful?
I planted them last spring, before I even knew anything about nerve damage, bulges in my spinal cord, MRIs and walking with a cane! But today these gorgeous flowers came in handy! I had to climb up part of a wall to get this shot. And I was able to do that - and get down without hurting myself! Hmmm. Maybe things aren't as bad as I think they are. Notice the sky! Even it is blue today - and not a cloud in sight!
Posted by hetty at 11:23 AM No comments: